I first came across Eileen Myles a couple of years ago, when I bought her book titled The Importance of Being Iceland, in the few weeks running up to a holiday to Reykjavik. The book cover itself was light blue with an image of an iceberg. Its practical colouring and basic font reminded me of a GCSE geography textbook I probably once owned for school, and I assumed it was nothing more than an outdated travel manual about Iceland.

When I flicked through it and recognised the author's name from a literary event I once (almost) attended, I was intrigued by the contrast in first impressions I had amalgamated in my head, and took it to the till.

I ended up devouring it. The narrative weaved in and out of Myles' personal experience, both the interior and exterior dynamics of how we move through the world. Myles navigated how travelling and art intersected, and I knew then that Myles' Americana style of writing fed me something I craved.

When I finally went to Iceland myself, I couldn’t stop finding myself dwelling on phrases Myles had plotted in my mind. If you've ever been to Iceland, you'll know that it has a very beautifully melancholy and moody aesthetic, which makes for great company for the car journeys you'll most likely take around the Golden Circle. It's a very thought provoking place; for me it straddles a peculiar rainy day comfort, but the landscape feels constantly changing in its own anxiety that lurks beneath the tundra. In other words, it's probably my favourite place I've encountered in being able to freely gaze out of a window and think, rather self-indulgently and undisturbed, other than by the occasional breathtaking sight of a waterfall or the surprise of a geyser.

“I hope you all find yourselves sleeping with someone you love, maybe not all of the time, but a lot of the time. The touch of a foot in the night is sincere.” Eileen Myles, The Importance of Being Iceland

Rather tongue-in-cheek at points, The Importance of Being Iceland navigates Myles’ experience of what it means to be a poet in the world. ‘The poet is like the earth’s shadow,’ she writes, in “Universal Cycle”. ‘The sun moves and the poet writes something down.’ As someone who enjoys writing, and can almost never stop thinking about it, I felt this kinship with Myles who seems, like me, to never not be contemplating how the world looks and how our words and art to reflect it fit together. Myles’ work seems to be a constant expression of thoughts, where the organic form of the thought itself is what takes the written form's shape; it’s never too perfectly constructed, which gives it a truthful, and at times, searing vulnerable tone.

Myles’ writing constantly exudes and sympathetically epitomises the want of human needs and desire, whilst almost constantly beating these confessions away with an insecure frankness that we can admittedly resonate with out of self-preservation. After recalling her family’s history of alcoholism, she says, “I found myself in my thirties leaning into the mirror one night cleaning away and I thought: fuck, is this what I lived for—to floss.” Myles takes a question, and turns it into a statement, as if to put the passing thought under a lens of its own. Yet without the interruption of the question, the poetry of the writing “keeps moving at all costs.”

“You know how you’re always half hungry while in bed. Well this was like sleeping with a meal, a big fried meal, you have your arms around it.” - Eileen Myles, Chelsea Girls.

With frequent references to whiskey, cigarettes, and various forms of transit, Myles proves to have an addictive filmic style of writing that I truly believe only North American writers achieve best, in that lyrical, Americana Bob Dylan style of expressing oneself. It's like a quick-hand stream of consciousness that never quite sits down, and then sentences find themselves at an abrupt end, or they deliver an abstract image you can’t quite get your head around, and then the penny drops. Frank O’Hara is my favourite poet at harnessing this style.

I recently finished reading Chelsea Girls which, in the midst of a painful break up, I thought could be a terrible idea, as it had been described to me as a foray of lesbian affairs, and I expected that meant of the more crude kind that would only force me into the corners of the more negative feelings I was experiencing at the time.

But the book gave something back to me that I didn’t know I had lost. There’s an element to queer relationships that can incidentally make you feel validation when you have external approval of said relationship. It gives you a form of visibility to be seen in the street holding hands or to have family recognise that your relationship dynamics and emotional experience don’t differ all that much to the heteronormative relationships they’re familiar with. Suddenly when you lose that, particularly if you don’t have visible indicators of your sexual identity, which I often feel privy to as a femme lesbian, it feels like the strength of your identity is externally washed down slightly, and this part of you can be made to feel invisible, an uncomfortable and often traumatising hangover from the pull of the closet.

Reading this book reminded me that this isn’t the case. Myles navigates a multitude of queer affairs, from brief flings and bad sex to more tender longing and electric love making, unabashedly capturing the highs and lows of both boring and more tumultuous love affairs between women. My heart twinged and yearned and laughed at so many points throughout the book, it reminded me that such a large part of being queer, and even just a human, is the shared experience of romance, joy, lust, love and pain, and it constantly evolves as much as it withstands. This is the coming-of-age novel I needed to top off my second adolescence.

“What I started to understand was that the poem was made out of time–past, present and future. It lives in the present, it breathes there and that’s how you let anyone in. I think people can feel this accessing of time in poetry very readily. As soon as the poem ceases to be about anything, when it even stops saving things, stops being such a damn collector, it becomes an invite to the only refuge which is the impossible moment of being alive.” - Eileen Myles.

From Myles’ 1960s Catholic upbringing with an alcoholic father, navigating a fiery adolescence and her brazen lesbianism, and her pursuit of survival as a poet in 1970s New York, the autobiographical Chelsea Girls feels like a series of short films in literary form, transforming snapshots of life into works of art, to form one body of work, and the mundanities - as well as the celebrations - of life breathe through it. Filled with alcohol, sex and drugs, and the experiences of a young artist’s life, the novel contains a series of poignant, humorous and sometimes troubled expressions of a world that feels restless, joyless, joyful, and everything in between. This intimate exploration of a writer trying to break out of the manacles of a rigid cultural identity which tries to define Myles, has become one of my favourite inspirations of writing thus far.

The experience of reading this book, along with other shifts and changes in my life, reminded me that there are always possibilities of revival, that certain experiences and negative feelings can be temporary, and sometimes time is the only thing that can shift your life into an entirely new place. There are always chances for new beginnings if you allow them to find you. In life we find touch points that make us feel at home, whether it's a song, a place, a book, a person or a particular area of interest, and the writing of Eileen Myles has made me feel very much restored. 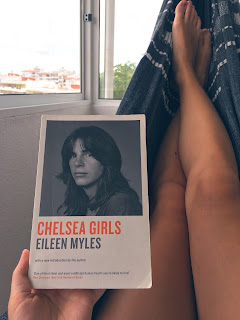 Literature is love. I think it went like this: drawings in the cave, sounds in the cave, songs in the cave, songs about us. Later, stories about us. Part of what we always did was have sex and fight about it and break each other’s hearts. I guess there’s other kinds of love too. Great friendships. Working together. But poetry and novels are lists of our devotions. We love the feel of making the marks as the feelings are rising and falling. Living in literature and love is the best thing there is. You’re always home.