As much as we're embarrassed to admit it, nothing beats a good old-fashioned, bittersweet tale glazed with romance, particularly those less cliched plots we're no so used to seeing. On days when I need a little bit of escapism, Blue Jay is my favourite of this kind of film to go to.

Moments in, the film pulls its viewers into the black and white bathysphere of the small Californian rural town in the San Bernardino mountains, surrounded by trees, lakes and nostalgia. Written by and featuring Mark Duplass, the film follows the unexpected reunion of former high school lovers Amanda (Sarah Paulson) and Jim (Duplass) in their hometown. Over coffee at the aged Blue Jay, they begin to retrace their steps back into a past long gone, in a present no longer satiable.

As intimate hours pass, the two discuss what has happened in their lives since their golden years. Amanda got married, and became the stepmother to two children. Jim is working on building houses with his uncle and thinking about renovating his late mother's home.

While walking Amanda to her car, the two pass a liquor store they went to frequently in their heyday. Amanda bets that the store owner will recognize them from when they were kids.To Amanda's satisfaction, the store owner does remember the two. He remarks about how the two "famous lovebirds" are still together after two decades, and Amanda and Jim jokingly play along about how they are still a couple after all this time. The magic of nostalgia ignites this scene with a playful twinge of sadness.

They visit Jim’s mother’s house, where a well of memories are uprooted as they rediscover old memorabilia and relive their golden years, when Amanda discovers a letter written years ago that is addressed to her.

I won’t spoil the rest, but what follows is a raw and difficult back and forth of what is and what could have been, with a confession that reveals what caused the couple to split all that time ago, thus revealing why this false imaginary future never occurred.

Shot in just several locations around a small town in California in seven days, the cast used a ten page outline for the basis of the film, and improvised much of the dialogue.

The black and white aesthetic takes some time to get used to, but eventually, it is the catalyst for the magic in this film, capturing the nostalgia and the bursting smiles and tears of both characters as revelations flurry between them, and the film becomes a suspenseful, timeless masterpiece, the antithesis of blockbusters with big budgets.

Instead, this low-key character driven story feels personal, painful, and my favourite Sarah Paulson character yet, as the story strips the raw feeling of longing for an alternative history to the back story of your life, right down to its core. 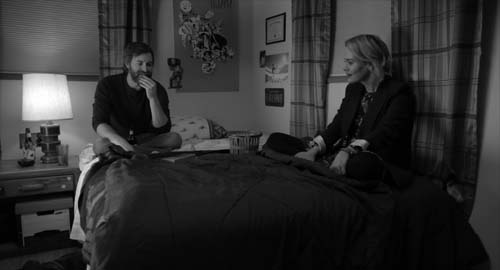