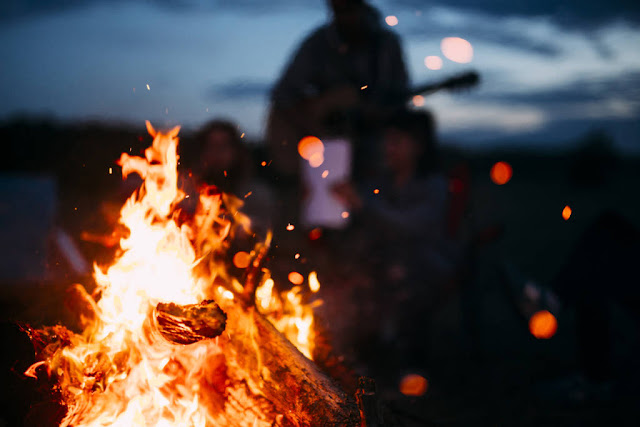 One of my favourite pastimes as a child was sitting by a campfire telling and listening to stories. The back-lighting of the fire always created a more theatrical atmosphere, which heightened the intensity of the stories.

It was around 400,000 years ago that humans discovered the ability to control fire. It expanded our menus, because we were able to cook food, which radically changed our diets, but food wasn’t the only part of culture that transformed with the power of fire.

In fact, perhaps it was fire that became the basis of all digital/visual storytelling we have now, from telling ghost stories around the campfire to film, with animation and SFX using graphics to animate a story.

A study of evening campfire conversations by the Ju/’hoan people of Namibia and Botswana suggests that by making the day longer, telling stories in the evenings by fire light, fire allowed people to delve into their imaginations and tell these stories that were far removed from the mundanity of day time. When we think about our film and TV watching habits, does this seem far away? For those who don’t work in the evenings, a lot of us will come home from school or work, kick our shoes off, and put Netflix, a film, or the TV on. We’re more likely to make going to the cinema an evening activity, rather than 10am in the morning.

In the 70s, anthropologist Polly Wiessner observed and took notes on the Ju/’hoan Bushmen, also known as the !Kung, on their day time and night time conversations. At three different points through the nineties and noughties, Wiessner returned to discuss these conversations with the Bushmen and receive help with translating them. She reported that, whereas daytime talk was focused almost entirely on economic issues, land rights, and complaints about other people, 81% of the firelight conversations were devoted to telling stories, including tales about people from other Ju/’hoan communities.

Wiessner proposed that campfires allowed human ancestors to broaden their minds with storytelling, which also helped to solidify social networks. In a paper, she wrote, “Stories told by firelight put listeners on the same emotional wavelength, [and] elicited understanding, trust, and sympathy.” She also added that fire still serves that purpose today, through fireplaces and candles around the home.
Stories are an intrinsic part of our societies and culture. Films, books, music, news, religion, architecture and painting frequently define our desires, dreams, and values, and have been handed down from generation to generation.

Before humans learned to write, they had to rely on memory to learn. To do so, listening was a most valuable skill. Good storytellers were always respected, and they could easily find eager listeners for their stories. As people traveled, the stories traveled with them, and information was disseminated.
The oldest surviving tale in the storytelling history is the epic, Gilgamesh, following the deeds of the famous Sumerian king. The earliest known record in the origin of storytelling was found in Egypt, when the sons of Cheops would tell their father stories.

Passing down from generations, these stories reflect the wisdom and knowledge of early people. It is now believed by most psychologists and historians that storytelling is one of the many things that define our humanity, as we’re perhaps the only animals that tell stories.