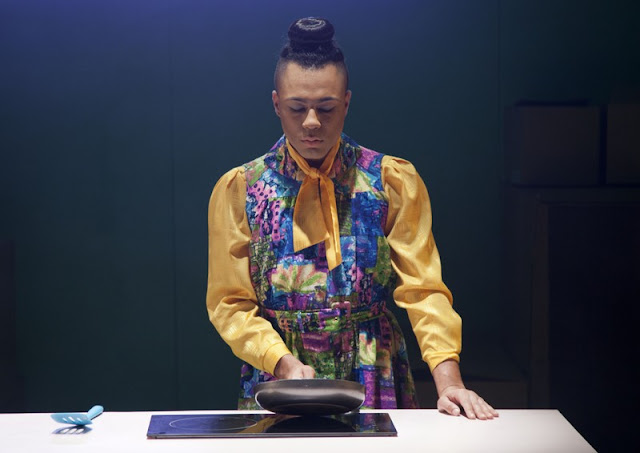 What came first, violence or gender?
In performer and writer Travis Alabanza’s new show, Burgerz, showing at Hackney Showroom in London this week, one thing is absolutely made certain: Travis is an artist who is constantly evolving in their craft, and is constantly reengaging their audience with a powerful voice that demands and deserves to be heard, more vitally now than ever.
Whilst Travis’s work has always been fearless in its tackling and testing of important and difficult topics, Burgerz is their most nuanced work yet. Hilarious, heart-breaking, and highly entertaining, this is a show you cannot forget, nor should you want to. It comes as no surprise then that the show has sold out all but one date, recently added this week, due to high demand.
The show begins with a curious start; a fascination about burgers, which to some may seem somewhat inconsequential. Here lies the first glimpse into Travis’ talent, firstly, as a writer, as a trivial introduction about the literal make up of a burger, deliberated about humorously and provokingly, becomes the priming pinch for this heart-breaking story to unravel.

Travis shares with the audience that a burger was once thrown at them on Waterloo Bridge in central London, in a violent attempt of anti-trans abuse from a stranger. The portrayed obsession with burgers now meets its cause, and the emblem of the burger evolves into something far bigger. The show explores burgers as an analogy for gender, identity, and contemporary society’s obsession with binaries, and the experience of being trans in a society that sees binaries as necessary for a destination, for belonging. What if a burger changes into something different? As Travis begins to cook a burger onstage at a kitchen unit, they ask for the assistance of a member in the audience, with a stark sincerity as though they are requesting the help of a stranger to help protect them in public. Instantly, you feel the room become sticky, awkward, intense. Some volunteer, but the audience is reluctant to join Travis on stage out of fear of judgment from the crowd, and suddenly the message that Travis is making is abundantly clear. Up until now we had been made to feel so safe, and this dynamic cleverly continues to juxtapose throughout the rest of the play, forming the crux of its power.
Travis and their volunteer don cute aprons and continue to cook the burger in a quaint kitchen setting with a beverage in hand, to the backdrop of cardboard boxes, and Travis begins to question the comfort zone once more. What if you find out halfway through cooking that actually you don’t like burgers, you’re more of a hot dog person?When did you know you were a man? The volunteer onstage suddenly becomes a key pivot in the narrative, by revealing how gender pressures and expectations become detrimentally second nature to us against our will.

And yet, the play feels so upbeat, warm, and always bursting with colour, from the beautifully bright colours of Travis’ dress, to the stage lighting. The play is constantly laced and spliced with witty improv and razor sharp comic timing, radiating Travis’ natural talent and charm over an audience. At times Travis exudes love and joy with a girl-next-door, hand-on-hip gait and giggle, and at others, they appear as an ethereal, heavenly figure, illustrated with intense movement and poise, as we learn about the history of trans and non-binary people who existed prior to the erasure and violence of colonisation. One thing that was consistently explored throughout the play was the intersection of race and gender in Travis’ lived experience as a black trans person. Travis constantly reminds us that these cannot be separated, that race informs gender and that these intersections and identities cannot be debated.
Burgerz is warm, difficult, sweet, heart-breaking, comical, and ever so important. Travis has proven to their increasingly bigger audiences and venues that their talent is exponential. They have finessed their craft in this remarkable show that should not be missed and deserves to be shouted about. In the current climate of rife hate speech online and anti-LGBTQ+ violence in the streets, plays like this have an important place now more than ever to shed light on and educate these real issues and prejudices. The play shines a cold and realistic light on the fact that we cannot walk on by, remain seated, or stay silent in the face of violence, and this show needs the exposure that it deserves.
Read The Muse rating: