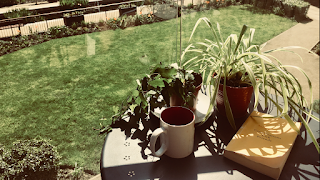 Can one sunny day change your life? Probably not, but it’s a start. I haven’t felt inspired to write for a while, but this morning prised feelings out of me.

As I write this, I’m sitting on my balcony with a cup of tea (the one time I still have a sugar in my tea to start the day right) and a plate of orange slices. It’s 9.47am on a Friday and it’s already 22 degrees – literally unheard of in London’s April (global warming’s not so fake news anymore). The past few days of clear blue skies and mid-twenties temperatures have led to a huge change in the way life's looking, naturally. Having been diagnosed with a vitamin D deficiency several months ago, it’s no surprise that after the longest winter ever things were getting a bit ragged.

That, combined with deadlines, job, the news, internships, interviews, relationship, friendships, health stress, money stress and my tendency to pretend these don’t exist by self-medicating with pints at the pub (which leads to more money and health stress), and generally learning how to be an adult, has made these past few months a bit much. Combine it with a weak body, fatigue and poor mental health, and malaise settles in, which had been lingering for months. I’ve been in and out of doctors’, popping vitamin D, convincing myself there’s something else fundamentally wrong with my health, imagining the worst extremes like cancer or a heart problem. Every time, it turns out to just be stress and anxiety. For anyone reading this who has experienced anxiety (not the stress you get when you aren’t getting a text back) you’ll recognise the feeling. Anxiety is crippling, terrifying and frustrating as hell. Having arrogantly considered myself as someone who deals with life and stress rather nonchalantly, I used to think it was something teenage girls would act out with for attention – now I realise how wrong I was. It’s a physical thing that can strike unexpectedly, no matter how relaxed a person you think you are. Some days I don’t want to leave the house out of fear that I might have a panic attack in public and no one knows, or that I won’t seem myself around people who don’t have a clue what’s happening inside my body. I wouldn’t wish a panic attack, that doom-filled feeling that you are near death, on anyone.

Even without the anxiety, life would still be pretty grinding, no doubt.

It seems to be the general vibe of early twenties that it is tough and weird, trying to decide what kind of person you are or what you want to be, what job or career you want that isn’t that mundane part time or temporary job you’ve got going. That low-paid assistant job or internship (unpaid probably, if the latter) that you thought would be creative but is actually just glorified admin day in day out. I used to consider myself destined to be a career person, but I’m trying to step back from the pressure of this year, and the pressure I put on myself about where I’d be at what age. Talking to people in work or who are older than me, I haven’t felt inspired to rush straight into anything. As long as you’re earning the money you need to and you feel personally fulfilled (not fulfilled by someone else’s standards) and you feel somewhat valued, that’s what’s important.

I’ve read so many books and listened to music recently that’s allowed me to reconnect with myself. I can’t recommend enough to anyone who loves food, or has a difficult relationship with eating, to read Ruby Tandoh’s recent book Eat Up! I didn’t expect a book about eating to have quite the impact on me that it did. I’ve never thought much about the food that I eat, and Ruby Tandoh’s book has put my mind at ease about that. She doesn’t tell you how to lose weight, how to eat lighter, how to go vegan or how to make superfood meals that cost more than your hourly rate. Instead, she shares interesting anecdotes that are personal or about the origins of food, and explains why it’s important not to judge other’s eating habits or choices, both personally and culturally, but most importantly, why it’s important not to beat yourself up all the time about what you put in your body. Everything’s a balance, and treating yourself is okay, is ultimately her motto, (but she words it much better).

I’ve also just started reading Conversations With Friends by Sally Rooney, and the little moments of dialogue and descriptions of people in the book has made me think about the people around me and how grateful I am to have them there, to keep everything in-check and familiar. Remembering that they’re going through similar things too, and you can connect on that basis, or give each other the break from life, or from themselves, because you all bring something different to the table. If people were a bit more open to the emotional support you have the power to give to people around you, life could be a bit more sufferable or enjoyable.

I think sometimes you just have to cut yourself some slack, and take a moment to reward yourself for the little triumphs. Take a moment to just look about you and think, “I’m doing okay.” Submitted a piece of coursework or nailed an interview? You go gurl. Made a banging meal? Nice. Feeling yourself today? YEAH you are. Even when some things are a bit broken or agging your brain, you have to appreciate where you are and give yourself the allowance to just enjoy the present.

Yesterday afternoon after work I took a book and my headphones to Southwark Park to enjoy some afternoon sun. Music was on shuffle, and New York City Serenade by Bruce Springsteen came on, a song I’d forgotten about for a while. It had been the song to sooth me on a flight to New York (figures) to calm those awful flight nerves. The first minute’s a little stressful, not dissimilar from the way living in a city feels, but then at 1:18 the song melts into you like milk swirling into coffee. I let all 9 minutes fifteen seconds of the song play out as I closed my eyes, and felt the springy grass beneath my bare feet, and it was the first time I had truly felt relaxed in months. I later enjoyed a beer in a pub garden with friends, and this morning, my girlfriend and I enjoyed breakfast together on the balcony in the sun. Fried asparagus, eggs and kale (unusually healthy for us, they needed using up) with a cup of tea. It’s moments like those that we let pass by too easily, and I’m going to start making more effort to write these moments down as something to remember in more stressful times. Maybe I’ll start a new journal, to write down good thoughts, funny exchanges between friends, funny email exchanges with my girlfriend, a good meal, an outfit, or anything that brings me joy.

Maybe this is just what being twenty-two feels like. Maybe it’s the same at 25, or 30. The world’s in a bit of a state, but I think we’ve got to give ourselves a bit of credit for the day-to-day. Celebrate yourself when you’re feeling it, care for yourself when you’re not, and do what makes us happy when we can.

It’s midnight in Manhattan, this is no time to get cute. It’s a mad dog’s promenade, so walk tall, or baby don’t walk at all.