Over the past year we have seen a whirlwind of events around the world scrutinised in the media. That list obviously consists of Brexit, Donald Trump, and the rising fears surrounding terrorist attacks, the consequences of the election and the future state of UK politics as it navigates negotiations with the EU and continues to adjust the workings of the country for better or worse. There is so much more, not to mention all the things happening around the world, near or far, that are not broadcast in the news.

Digesting these issues, as we are pulled out further from our comfort zone, contributes to a growing, widely spread anxiety which often results in fear. This fear embeds itself in the walls built into our society which becomes responsible for the perpetuation of divides between us. Tory or Labour. Gay or Straight. Middle Class or Working Class. Black or White. It goes on. We process what we see in the news by expressing our opinions to one another or in tweets and various social media platforms, in this sort of superficial form of activism.

What if we felt so opinionated about things happening in our personal lives? For some reason we don’t talk about things the same way. The same fears and anxieties we feel from being hurt, or experiencing neglect or trauma, manifest themselves in similar behaviours in our personal lives. We have a tendency to become guarded and untrusting, cynical and cold. As a result, we become disconnected.

It seems that there aren’t enough people listening to each other. There is a lack of care, and it's not about Piers Morgan’s perception of “millennials” as the “snowflake generation” who he calls a “faux-tormented bunch of absolutely deluded cretins” (see full article here)… It’s about letting ourselves be human again.

Firstly, Piers Morgan perpetuates the divide between the young and the old, as though we have no way of relating to one another, therefore we are unable to compromise or empathise with each other. Perhaps Piers Morgan should also realise that his decision to invest time in writing such a critical article about the wrath of winey young people disagreeing with his views, in the white capitalist world which suits him so well, is precisely the point as to why millennials get angry enough to voice their need for change. The difference is he gets a pay cheque for his opinions, and young people are more of an irritable fly in the room he attempts to swat away, as opposed to being a force which directly threatens his bank account. Not everyone is like Piers, because Piers is ignorant enough to tell the “squealing softies” to “suck it up [and] get back to work or college, and if you want to win next time, get a candidate who’s a winner not a loser” without realising that it wasn’t solely up to young people to choose the American candidates in last year’s election in the US. What is more, not everyone can afford or have access to go to college, no matter how bright they are and what aspirations they hold. Perhaps Piers Morgan is the "softy" who needs to stop being so angry and show some compassion for the people who aren’t him, the people who can’t benefit from the society that pays him to be an obnoxious journalist with such ease that he can.

In other words, how the state of the world makes us feel is incredibly important for change, as opposed to the perception that how we feel gets in the way of the world turning, a common discriminative argument used against women for why they shouldn’t be leaders. Thanks to the internet, the younger generation has access to all kinds of stories, people and politics, and are not as naïve as we might appear. It may be the thought of an idealist, and so be it, but it seems that the only way we can move forward and really change the workings of society is when the world learns to empathise with the people who inhabit it, without these divides or our prejudice obstructing our ability to.

Sense8, a two season Netflix series which was sadly cancelled for continuation, follows eight characters who find themselves connected to one another via their thoughts, all existing in different parts of the world, so the show is filmed in locations spanning from London, Nairobi, Reykjavík and Mumbai. In this plot, the characters are able to experience moments from one another’s lives despite being thousands of miles away and from entirely different walks of life. Another show on Netflix, Thirteen Reasons Why, explores the narrative of a teenage girl’s documented experience of struggling in her mental health before she commits suicide. If fiction could become reality, how differently would we approach and confide in each other if we had the ability to step into one another’s shoes so literally?

Around the world we see so much pain and anguish, and we often end up feeling hurt and helpless about it. Sometimes it becomes so disillusioning to see and to feel as though we can’t change anything significantly. In the twenty first century, we have come so far, but there is so much that still needs to be changed.

This month is Pride month, and I only hope that it’s a time that, despite everything, we can come together for the greater good of love, no matter who we are. A quote I constantly find myself thinking of is one from a favourite writer of mine, Audre Lorde, a writer, feminist, womanist and civil rights activist, who I had the privilege of studying this year. “The sharing of joy,” she wrote, “whether physical, emotional, psychic, or intellectual, forms a bridge between the sharers which can be the basis for understanding much of what is not shared between them, and lessens the threat of their difference.” This is the epitome of what I feel pride should be about. It should be a time to celebrate these parts of us that society tells us to dim for the sake of their censored consumption. We have the right to exist exactly as we are, and to love one another unconditionally for it.

I ask for a little less conversation about that which is irrelevant, and a little more on what is important - love. What would really benefit society is if we became better listeners for those who need it because some don’t often have the opportunity to lead the conversation. In a time when we feel as though there is very little that we can control, of the things that we can control, one is in the way that we treat each other, by allowing ourselves to confide in one another and offer ourselves to each other with affection in order to heal and find hope. Although there is so much yet to change, this month is about resilience and healing, and a chance to put down the self-preservative pride, and replace it with the sort of pride that makes you want to celebrate in selfless love for the sake of consolation and our ability to survive. Difficult times rest behind and lay ahead, but a little more compassion wouldn’t hurt for solidarity. In doing so, we can realise that we are all connected in our need to feel safe and to feel loved, no matter how different we are. 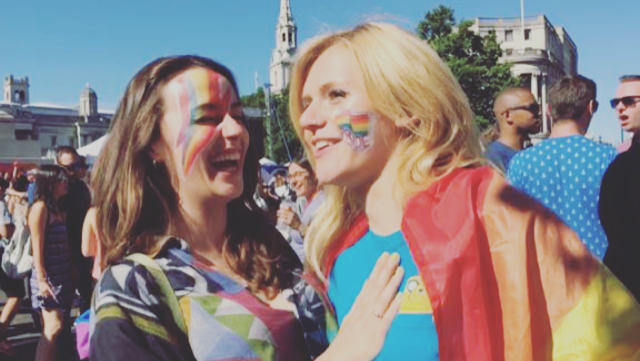