Reading in the 21st century - are books becoming a thing of the past? 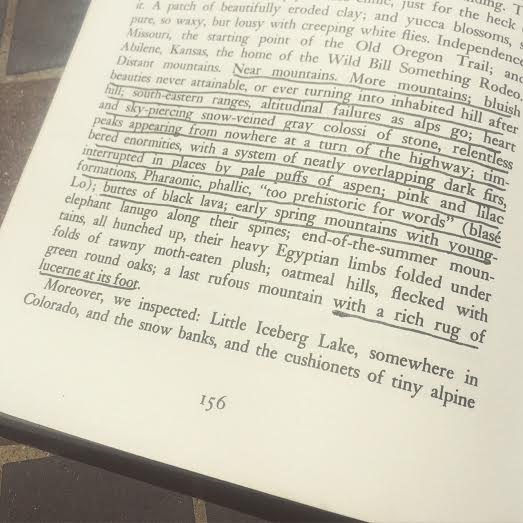 “The net seizes our attention only to scatter it.” – Nicholas Carr, The Shallows.

Studying in the US on a summer exchange program has been an unforgettable, inspiring experience. Perhaps it’s more aligned to the nature of the classes I’ve selected to study, but what I’ve noticed here at the University of North Carolina at Chapel Hill is that the approach to studies is particularly forward thinking, with much of the class
discussion focusing on how we use technology and communicate with the constantly changing world that we live in. At the impressive journalism school here (which has its own Hall of Fame for successful alumni) the course options are heavily web/visual based, which I think is a crucial element for media related studies in the twenty-first century, to help us understand what technical environment we are creating around ourselves. Today, for example, we discussed the ethics regarding filtration of our Facebook news feeds, which is organised by the calibration of algorithms, and how this shapes our view of the world online. Since studying the module, I have become less naïve to the way in which information is selected and fed to us. 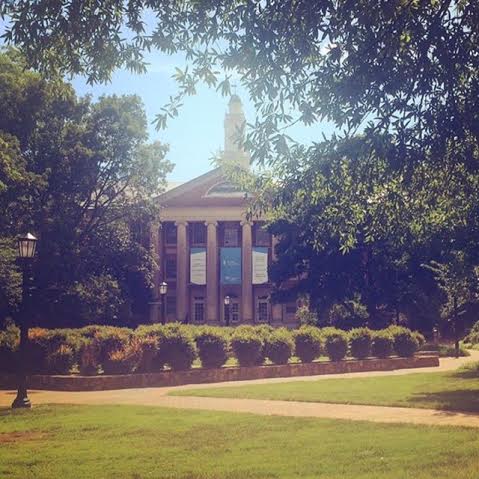 School of Media and Journalism, University of North Carolina at Chapel Hill,

The class that I particularly find myself thinking about outside the classroom, however, is 'Literature in the Digital Age', designed by Henry Veggian (who knows I’m writing this and is potentially reading my big up of his class - hi Henry).

In this modern age of technology, where we find everything around us evolving to improve convenience, the activity of reading has become more swift, accessible and on-the-go in leisure, work and education. Arguably, however, the way in which we read, and in what format, is not essentially developing positively, at least, from the nostalgists' point of view, as Nicholas Carr explores in his book, The Shallows, a key text we’ve looked at on the course, where he describes our automatic inclination to skim read in order to keep up with the immediate nature of modern life.

Skim-reading is a skill I both aspire to master and loathe to use. As an English literature major, my reading speed is constantly against the clock as we are usually set four texts to read per week (A.K.A hell for slow readers like me who also enjoy the pub). However, as I have often found myself trying to consume these texts under time pressure, it’s occurred to me that I’ve often “lost the plot” in the most literal sense of the idiom, where it has felt stressful to keep up with what’s happening in the novel. I rely on the fact that, as long as I have the general gist of what’s going on in the text, I’ll be able to answer questions in a seminar on the spot, without making a fool of myself.

With the constant distraction of technology and the ability to Google plot summaries, or any answer to any question which we demand to know, is the accessibility of being able to find only what we ‘need’ to know via the internet making us more knowledgeable? Or rather is it counterproductive, because we’ve lost the patience to read fully around a topic, which makes the information we choose to consume more limited and superficial?

As technology development has continued to nudge us away from hard copies towards devices, the invention of the kindle arrived in 2007 to match the trend. Much like vinyl and Polaroid cameras (now even CDs), books are becoming threatened by the label of novelty, however, people still seem reluctant to let books go. This could be down to our materialistic culture: if we’re paying for it, we want it in our hands. If it’s on a device, we’ve merely paid to claim a little piece of data in cyberspace.

Many people seem to prefer the sentiment of a novel. Before I came to the US, I was involved in a global book exchange where people would post their favourite novel to a mutual friend anywhere in the world, in order to protest against the erasure of book culture (ironically instigated by a Facebook post), and it was surprising how many people wanted to get involved, demonstrating people’s desire for the exchanging and sharing of tangible books to continue. Before this trip, my mum also gave me a copy of Paulo Coelho’s The Alchemist, with a personal inscription inside, which I’ve been purposely saving to console myself when this adventure draws to a close. It wouldn't possess a scratch of the same sentimental value had she gifted it to me via Amazon to read on my Kindle.

So why is it that Kindles and e-books haven’t quite taken over the way in which we consume published works the way they were expected to? Perhaps the e-book’s inability to single-handedly erase the book reveals our nature that we are reluctant to be reliant on technology.

There are several hurdles with the technical aspect of reading on a device. You’ve got to have internet access to download a book in the first place. Once this is done, you have easy access to your reading, at least until the battery runs out. In contrast, with a book, after making the initial purchase, you now have your hard copy, and it’ll be there for you whenever you need, wherever you left the fold in the page, so you can pick up and carry on with the story. With a book, you can indulge in one narrative (or multiple with the likes of split narratives like Game of Thrones). With an e-book, however, you have online access to hundreds of narratives by different writers at your fingertips, which ties into the problem of information overload which we face in the digital age where it almost becomes intimidating to have access to so much, which creates this sense of impatience and a lack of time to be able to read everything. This is certainly something that Carr touches on in his novel, as he reminisces on his feelings of old visits to the library:

‘There was something calming in the reticence of all those books, their willingness to wait years, decades even, for the right reader to come along and pull them from their appointed slots. Take your time, the books whispered to me in their dusty voices. We’re not going anywhere.’ 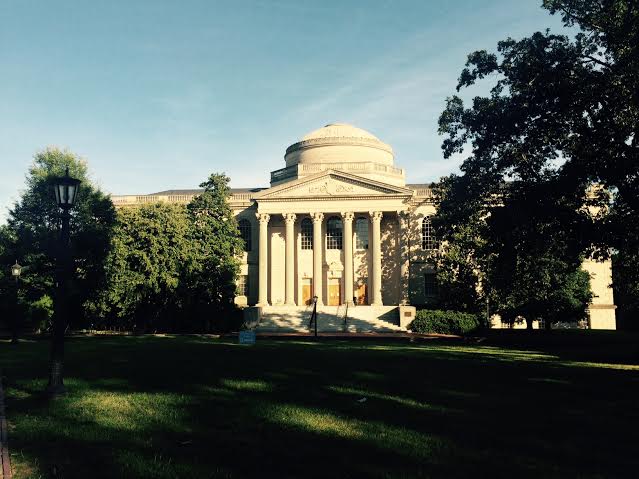 He reveals how we seem to have become greedy to the speed at which we wish to take in what we read, speaking from his own experience: ‘But my brain… wasn’t just drifting. It was hungry… and the more it was fed, the hungrier it became’. Essentially, we have become more effective at finding what we want on a need-to-know basis, thanks to the internet’s ability to scale down and carefully select pieces of text that contain keywords or topics of what we’re looking for.

So given the idea that we are constantly evolving to improve the way in which we inhabit the world, what does this retraction in our ability to concentrate on dense amounts of text say about the human race? Is it necessary to possess the ability to read deeply in the modern age, or is this style of reading a time wasting age of the past, in a world where we can ask Google for any answer to any question within seconds, which would have taken hours of trapesing through libraries in the past?

My favourite text that we've studied on Henry’s course is the poem ‘Agrippa: A Book of the Dead’ by William Gibson, a memory poem about his father's and his own youth. The title is taken from the 'Agrippa' brand of the 1920 Kodak photo album which preserves the images of the father captured by the camera. Its full title suggests that the photo album functions as a tomb, preserving those who are no longer living in photographic form. The theme of loss becomes detectable within the imagery: ‘Inside the cover he inscribed something in soft graphite, now lost’. Initially reading this, with the purpose of the class in mind, I interpreted the pencil writing to symbolise hardcopy information and how it becomes worn and faded, or even lost, over time. This is a key topic in the history of literature for the way in which certain stories reach through to the twenty-first century over others, such as Beowulf, while others become lost in time.

What is interesting however, is the digital form of the poem that we looked at, which is coded in a way that displays the poem as a constantly moving scroll, allowing us readers to consume it at an enforced pace, before it is then, famously, 'encrypted' forever. In short, it is shown to us once, and then gone forever - you physically cannot access it again. In this particular digital form, we cannot skim it or speed ahead over the lines; we are forced to digest at the speed that is enforced. Perhaps the choice of this is a reflection on the pros and cons of technology. In hard copy, we have the freedom and time to hold onto the content for as long as we wish to indulge in it, in a physical copy which can be preserved, although it is vulnerable to wear and tear. With a digital version, however, texts can be multiplied and easily shared, but can also become lost in cyberspace, as the digital version of the poem demonstrates.

As I peruse around the town of Chapel Hill between my classes, finding grassy spaces, aesthetically pleasing cafes or a free spot at the poolside to read my hardcopy of Nabokov’s Lolita, or my new reading venture, The Five People You Meet in Heaven by Mitch Albom, I am usually equipped with a pen to highlight my favourite lines, scribbling notes down the sides of the page, dog-earing pages with themes that I like or wish to go back to. With a kindle, whilst I have the option to make a digital note, it simply isn’t the same. To me, books are gifts and mementos which have the power to draw you back to wherever you were when you bought it, or to the person who gave it to you, and the person you were when you found yourself reading it for the first, perhaps second, or even third time, making notes of your favourite moments and lines.

From an aspiring writer’s perspective, I fear the day that our overflowing bookshelves are reduced to a technological device which reigns in material cost but is inherently indebted by sentiment. I suppose only far in the future will we see the long term effects of this changed style of reading, and whether our old pal, the leather spined book, will still be around to tell the tale, literally. 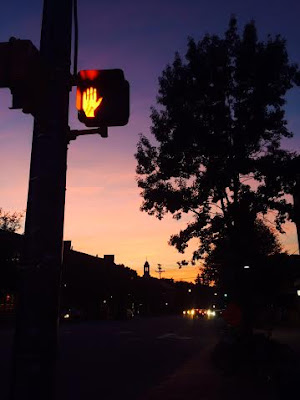