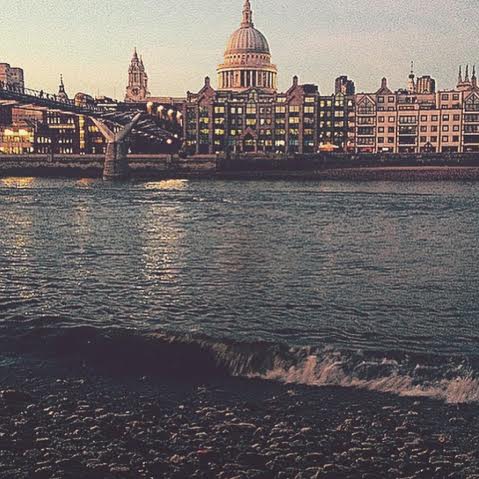 I went for a walk last week after a long day at uni, just along Southbank. The dusky tendrils of the night sky had begun to twist around the buildings of Canary Wharf and the other tall buildings that are clustered around the river.
The sky was a watercolour mixture of pinks and purples as the low November sun was finally going down. It had been a clear blue sky all day, or so I had known from glimpses at the window views of my seminar rooms.

I could have got the tube straight home from Temple station, just a two minute walk away from my uni building, but for some reason I didn’t. Instead, I crossed Waterloo Bridge and prepared myself for the dreaded walk across the Thames that had become a task in the pouring rain and biting winter cold this time last year as my daily walk to uni. Back then I had begun to forget to appreciate it.

The distance between first and second year, now that I live in a different area, had thankfully reminded me to appreciate the view again. In this moment it was beautiful; the whole scene of dusky central London unfolding around me.

As I strolled beneath the strings of lights tangled in the trees along Southbank with my headphones in, creating my second year soundtrack to London, over my music I could still hear people chatting about all walks of life, whether they’d just come out of the National Theatre and were discussing parts of a play they loved, or what they were going to have for tea tonight after a long day at work, or tourists soaking up the last few moments of their day in London.

It was comforting, but I wondered how many of them were appreciating the scene like I was (I’m not the kind of person who thinks that once you’ve seen one sunset, they’re all the same).

Before I moved to London, I had always thought of the city as being a really grey place, and sometimes it can still seem like that, on a cloudy day, especially with my flashbacks of getting to and from Victoria Coach Station for the £5 megabus journey back and fourth to Bristol (it’s a pretty dreary place, for those of you who’ve never been).

There was nothing grey about London that evening.

I found an empty bench by the river to read the book that I was currently indulging myself in, because I was trying to save money and not pay £3 for a coffee and a cosy seat in a café (I’d already treated myself to lunch and a pint in the student union for lunch, so I was trying to be disciplined).
The shimmering lights from the busy bars and restaurants behind me created a colourful kaleidoscope on the page; my only reading light under the darkening sky.

Whilst I was sat there reading, I happened to look up, and I saw an old man at the water’s edge on the tiny pebble beach of the Thames that only appears at low tide. He was dancing.

Taken aback by the scene, with the backdrop of St. Pauls and the lights of the city beyond it, I lowered my book and pulled out a headphone for the sound to be replaced by a classical band that was playing just down the way. I glanced down at the man again, and an old woman (presumably his partner who was accompanying him on his evening stroll) ran, yes, ran, to join him, and right there they ballroom danced on a beach by the Thames on a Tuesday evening without a care in the world. For free.

Strangers stopped and watched the old couple from the bank, cheering in admiration for this fleeting moment that passers by could have missed if they didn't think to look. It was as if I’d been caught in the scene of a film, like a sequel snapshot to Love Actually.

But no, it was really happening. And everyone was enjoying it.

The sky darkened beyond reading capabilities and my phone was dying so I picked up my book and kept walking with my headphones in. I was getting really hungry too so part of me was excited to get home, but I almost resented that I couldn’t just stay.

When I crossed back over the river along Blackfriars Bridge to the tube station, I picked up a free Daily Express paper for a different sort of read on the way home, but in one glance I saw the front page headline ‘TUBE TERROR’ and decided not to read it for now.

I read it the next day and the article was about an attack on the tube which had caused a dangerous overcrowding of rush hour commuters at Stanford tube station.

But I didn’t read it that evening. Instead I had decided to put it in my bag for a more suitable moment, and joined the rush hour commuters on my twenty minute ride home, reminiscing my short and sweetly enjoyable evening with my headphones in.

I’ll read it tomorrow, I’d said to myself. I hadn’t wanted to hear the bad news, just for one perfect evening. I think it’s okay to do that sometimes. It wasn’t a matter of being ignorant, it was about appreciating a good time, letting one spontaneously perfect evening be just that.

I could have gone home straight after uni, but I’m pretty sure that the work I’d done in my seminars that afternoon isn’t what I’ll remember about that particular day.