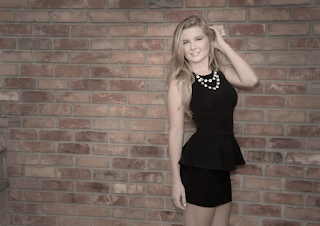 On the last evening of my family holiday in Florida, sheltered away from thundery showers in a beach shack-like restaurant called Jimbo’s Sandbar beside the Dania Beach Boulevard Bridge, Hollywood, Florida, we were treated with a heart-warming evening performance by the extremely talented up-and-coming country singer-songwriter from Fort Lauderdale, Florida, Ashley Briggs.

Despite having an audience of varying ages who were a little occupied with their meals and table chatter, Ashley was skilfully able to capture their attention with two sets as her strong vocals, accompanied by her guitarist, Frank, and the unintentional percussion sounds of pouring rain upon the Intracoastal Waterway beside us, had people turning heads to watch (or even dance to) her impressive covers by famous country artists such as Shania Twain, Keith Urban and Lady Antebellum, and a cover of Train’s ‘Drops of Jupiter’, which got many members of the audience singing along, myself included. 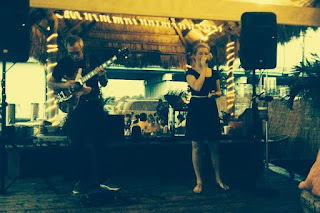 She also performed some storytelling songs of her own, including her songs ‘Take Me Back’, ‘I’m Keeping You’ and the title track of the album, which not only demonstrated Ashley’s creditable song writing skills, but also revealed her old soul disguised within a young talent; she says that she is yet to fall in love or have her heart broken, but has been able to put herself in her best friends’ shoes and write about what they went through. Her inspiration comes “not only from my own life and experiences, but also the experiences that the people close to me go through”.

In the past, Ashley has performed on the Plaza Stage for LiveNation at the Cruzan Amphitheatre in South Florida prior to the Tim McGraw, Brad Paisley, Jason Aldean, Rascal Flatts and Luke Bryan concerts.  Her original songs have been featured on Hallmark Channel’s Cedar Cove and ABC’s America’s Funniest Home Videos, and has just released her debut album ‘Heads or Tails’. She grew up listening to country music through her family, and her music has been greatly influenced by artists such as Martina McBride, Shania Twain, Dolly Parton, and Carrie Underwood as their music “showed me how to tell stories and create unique sounds and melodies”.

This young artist’s talent speaks for itself on her debut album ‘Heads or Tails’ (available to order on her website). The first track ‘Lightning Set It Off’ is poetically written, a notable lyric being “He’s got a reckless heart that’s begging me to run free”, and has a young Taylor Swift-esque vibe to it. ‘Make My Own Mistakes’ exuberates a little more edge and shares a voice of self-discovery in the big world: “don’t know what I don’t know”, followed by ‘Too Late’, conveying an exciting experience of love at first sight.

Then comes the higher tempo, slightly twangy ‘Country Girl At Heart’ that carries the message as confidently as the title seems to, expressing the feeling of not fitting the stereotypical profile of a country girl; ‘I might not ride the rodeo or be from round these parts’.

‘Take Me Back’ seems to be one of the strongest tracks on the album with a poignant sense of nostalgia created in the title itself, with its deep darker notes resonating and pulling heart strings. Its live performance beside the river, backlit with fairy lights as paper American flags dotted around the restaurant fluttered in the breeze created a fitting aesthetic.

‘Heads or Tails’, the title track, maintains a slower, more regulated beat and a sense of uncertainty with insightful lyrics about taking chances, and the penultimate track, ‘I’m Keeping You’, expresses a young hopeful voice of being in love, sprinkled with summery images.

Finally, the last track ‘Fly (remix)’ seems to aptly close the album on a grounding note about hopes, dreams, ambition and finding a place within it all.

It wasn’t just Ashley’s musical talent which was commendable, it was the way she captivated her audience with her stage presence even between songs; confident with a genuine sweetness. In Ashley’s future she hopes to move to Nashville and immerse herself in the music business with the hope of opening for someone on tour and even headline her own tour, but Ashley’s main goal is “to create music that touches people, gives them hope, and brings them happiness”, for she believes that music has the power to not only do that, but to change the world and everyone in it, and I couldn’t agree more.


This artist should not be underestimated and is very much worth watching. For more information and future updates see Ashley’s website www.ashleybriggsmusic.com , and make sure you follow her on twitter @ashbriggsmusic and her Facebook page at https://www.facebook.com/ashleybriggsmusic.
Labels: concert review