It’s kind of strange how the biggest, most exciting change I've experienced so far can be encapsulated in just those three words.

A great big black sky hangs over the twinkling scene of central London somewhere just outside my window, as I hug my knees that peak through my ripped jeans on the spinny chair at my desk, squinting through my glasses with a cup of tea in hand under the glow of my desk lamp. This is my usual spot.

Enclosed in the safety of my little student room in Southwark, just south of the river, it’s too easy to forget that I’m living in the capital city, until I turn down the volume on my CD player to reveal the distant rumble of planes, with their invisible vapour lines continually crisscrossing in the vacuous void above, and the frequent sound of sirens that wail after emergencies and lawbreakers; the distance of the echoes almost fictionalising what is really happening somewhere in the metropolis - the things we innocently dismiss from our conscious gaze.

Nonetheless, I find comfort in these sounds, because they’re familiar to me now. I've spent many a night with my feet up on my window sill, just listening, as the sounds of sirens and planes and cars and rain create a comforting cacophony beyond the glass, usually with a book in my hands. Sometimes the pages remain unread because I’m too wrapped up in my own wandering mind to throw myself into someone else’s, for the moment.

Today is the fourth of November, and the sky will be lit up with fireworks this time tomorrow, but it feels like September was just yesterday; the days go so fast now. The past two months have been peculiar in their ways, as I’ve finally begun to find my feet in this labyrinth-like city. It was lonely at first. Not only was it like the first day of school all over again, but on a much greater scale, without returning to the familiarity of your childhood home at the end of the long day. Instead, I’d step out of the classroom alone into a city I was yet to know, where every face was an anonymous stranger. Thankfully, that’s changed now, and the faces I see every day have become my new-found family, whether they know it or not. It can still feel a little lonely sometimes, like anyone can feel whilst finding their way around in a big city, but it doesn't necessarily mean we're lost.

In all honesty, I’m only really familiar with my local area; I still feel like a tourist sometimes as I venture away from Waterloo Bridge, but that’s what keeps it exciting.
I’m still the little wide eyed girl captivated by the view of Big Ben and the London Eye on my left, and St. Paul’s Cathedral and the trees of Southbank on my right as I stroll along Waterloo Bridge to my university campus that overlooks the passing boats on the Thames; it’s still exciting to me.

I'm yet to be bored here, that is, when I'm not surrounded by scribbled notes as I try to type out essays before their deadlines (fueled by regular cups of tea). On the days when I can pull myself away from my cosy bedroom or the library, every day is open to exploring, from sampling the various foods at Borough Market enough to feel quenched on a full lunch, to joining the busy bustle of Covent Garden on an idle afternoon after a lecture with the sound of a budding musician busking away, to strolling beside the river with my headphones in on my way home; putting my own soundtrack to my London wanderings.

I love the busy buzz of it all, yet there is no pressure to feel rushed as strangers exist in their own routines, anonymously coming together for a silent tube or bus journey of awkward glances, shuffling feet, and silence-filling coughs, only to hop off again into the obscurity of their own lives.

I’m the happiest I’ve ever been here, and I would go as far to say that it feels like home to me now, although I do miss my mum’s cooking every now and then, especially Sunday roasts, but there’s nothing to stop me from hopping on a coach for a quick family and friend reunion when I need it, for that kind of comfort when people have known you long enough to know what you need without saying.

I feel more independent, and it’s impossible to not feel inspired in this place, but my future feels unknown, truly, for the first time in a long while. At school I was always thinking about the next step, because I was sort of expected to; there was always a deadline to work towards so that I could get good grades so that I’d get into university.

Well, now I’m here, and the way I live now was once something I frequently tried to imagine during the rolling hours of my long school days. I've often been misinterpreted: I wouldn't necessarily worry about my future out of fear, I would worry out of excitement; I’d want to do everything in a way that would make me and the people around me happy, because I am well aware of how fast time inevitably ticks, but I think it’s time to let the reins slacken a little. I have no idea whereabouts in London I’ll be living next year when this little chapter ends and it comes to moving out of halls, I have no idea what the rest of my university experience entails, and, whilst I may have some rough ideas, I have no idea what career path I’m going to follow after that – and it’s liberating to have such a little sense of direction, because I can find a sense of purpose in other ways, like enjoying and questioning the things I invest my attention in on a daily basis, whether it’s the world around me, my studies, or something as little as escaping into an episode of House of Cards or a decent film on Netflix (my new hobby…).


I used to stress out about my future so much, but now it’s just something that I’ll find myself in one day, just as the present moment once was something I could only visualise. Everything goes so fast, and I’m happy here, so who knows what I’ll be doing when this chapter of my life transitions into the next; I don’t have to worry about it. I feel a sense of freedom now that I’ve never had before, and I’m going to let myself sail in whatever directions I’m drawn towards, for as long as it may last. 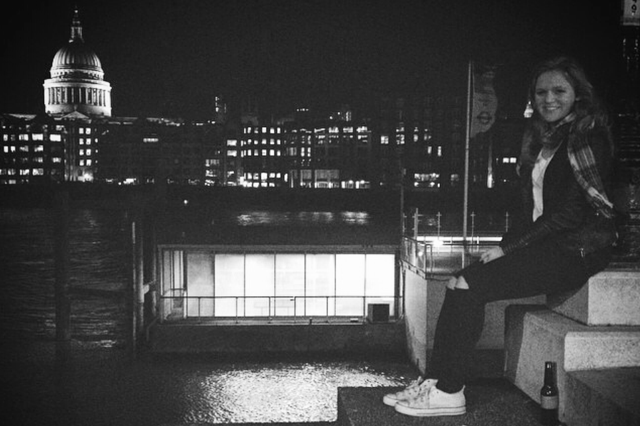